A Shout Out For The Ladies

A Shout Out For The Black Ladies

I choose to write about black women's contributions, which most of us have not heard anything about, just like I did for the men.

Dorothy Lavinia Brown (January 7,1919-June 13, 2004) was placed in an orphanage in New York when she was five months old by her mother.  She lived there until she was twelve.  Her mother, Edna, later wanted Dorothy to come home to live, but Dorothy ran away and went back to the orphanage.

At 15, she enrolled at the Troy High School and worked in Mrs. W. F. Jarrett's house.  The principal of the high school introduced Dorothy to Samuel Wesley and Lola Redmon.  They became her foster parents. She worked at a self-service laundry, and as a domestic helper, and at the Rochester Army Ordnance Department in Rochester, New York.

She earned her Bachelor of Arts degree from Bennett College in Greensboro, North Carolina.   She began studying medicine and became a resident at Hubbard Hospital of Meharry in 1949 despite opposition to female surgeons. She completed the residency in 1954. She became the chief surgeon at the Riverside Hospital in Nashville from 1957 to 1983.  She was the first African American female to be elected to the Tennessee State Legislature.

She became the third woman to become a Fellow of the American College of Surgeons and the first African-American woman to be elected to that body.  She received several honorary degrees.  She was awarded the Horatio Alger Award in 1994 and the Carnegie Foundation's humanitarian award in 1993.  Dr. Dorothy Brown died in Nashville, Tennessee, from congestive heart failure. 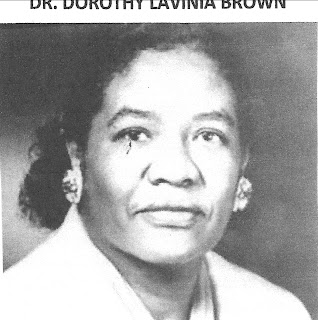 Mae Carol Jemison (born October 17, 1956)  When Mae was a little girl, she had a splinter in her finger, and it became infected.   This led her to do a science project on pus.

At the age of eleven, she took up dancing, African dancing, ballet, jazz, modern and Japanese dancing.  She was a background dancer in West Side Story.

She entered Stanford University at the age of 16 and received a B.S. in chemical engineering and a B.A. in African and Afro-American Studies.

In 1981 she obtained her Doctor of Medicine degree at Cornell Medical College. She traveled to Cuba, Kenya, and Thailand to provide primary medical care. She joined the Peace Corps and served in Liberia and Sierra Leone.  Later she worked at the Center for Disease control, helping with research for vaccines.

She applied to NASA and was accepted.  On Sept. 12, 1992, Mae became the first African American woman in space on the Endeavour.  She did experiments while doing 126 orbits around the earth.

She fosters science studies in many avenues. Too many to list here, but I counted the ones she has been and is active in.  I counted 20.

She is only 65 years old.  Imagine what she can do next! 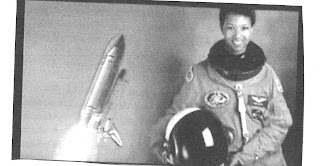 She was the first of the six children born into freedom.  She was orphaned by the age of seven and lived with her older sister Louvenia and brother-in-law, Jesse Powell.  By ten years of age, she was working as a domestic.  She had three months of formal education.  She was abused by her brother-in-law.  At the age of 14, she married Moses McWilliams and had a daughter, Lelia McWilliams. When the daughter was two, Moses died.  Sarah married  John Davis but left him and moved to Denver. She married Charles Joseph Walker. and she became known as Madam C.J. Walker.  They divorced.

She began selling hair products of  Annie Turnbo Malone.  The products were for black women.

Madam Walker ( Sarah Breedlove) started her own company of beauty products for black women.  She started a mail-order component run by her daughter while she opened a beauty parlor and the Lelia College to train "hair culturists."  She opened businesses in Denver, New York City, Indianapolis, and Pittsburgh.

She was known for her philanthropy and political interest.

At the time of her death, Ms. Walker was considered the wealthiest African American woman in America and the first female self-made millionaire in America. 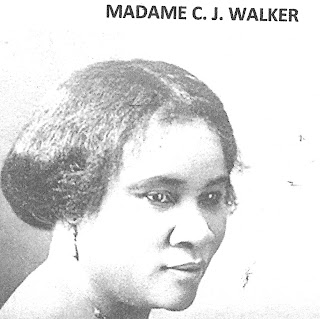 Mahalia Jackson (October 26, 1911-January 27, 1972).   Mahalia had a powerful, yet I think tender, contralto voice. She was called "The Queen of Gospel. She was known internationally as a singer and civil rights activist.  She recorded about 30 albums,  and her 45rpmrecords included a dozen "golds" ( million-sellers).
There will be a TV special on her life in April.  I look forward to seeing it.  Her voice was awesome.      ."