Loved the Story But Hated the Sentences!

In a previous blog, I said I was writing a story in the Third Person on a gnome named Ansgar.  I write the rough draft in bits and pieces as they come to me.  The following is one paragraph.
Ansgar returned with the ladder.  He leaned it against a tree.  He sat on the ground.  He watched the night sky.  He watched for the first rays of the sun.  He saw the darkness fade.  He decided to start before it became too light.  He stood and walked to the hole. 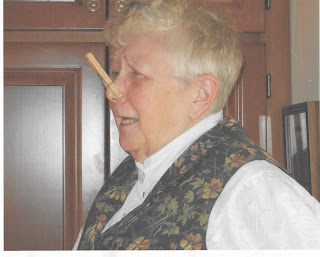 I underlined the noun and the pronouns standing for the noun. Notice they all began the sentence. I did not use the tip from last week on Show Don't Tell.  I want to illustrate the point of this blog.
The reader needs to know the character's name in the paragraph, so it is okay, to begin with the name and to begin one sentence with the pronoun, but no more.  The rest of the sentences should not start with the pronoun he or with the proper noun Ansgar.   They may appear later in the sentence but not as the first word.
Taking out some pronouns, my story becomes:
Ansgar returned with the ladder, which he leaned against the tree. (Notice I combined two sentences.) Facing East, he put his back against a maple tree and slid down.  The black night sky began to fade to gray as the stars were less visible.  The horizon turned purple, then pink, and began showing a light yellow.  I should start now, or it will be too light for my plan to work.  After he grabbed the ladder, he inched his way to the dark hole. (Italics are used on words the character is thinking.)
Yes, I did change the sentences.  I added more detail; some Show Don't Tell often helps.  However, notice I did use facing as a sentence beginning.  A verb with ing can begin a sentence but use sparingly.  When I was in school, many a long year ago, I was told not to start a sentence with a conjunction.  If you forgot what a conjunction is, it is a connecting word such as and, but, or, however, etc.  However, it is now okay to begin a sentence with a conjunction, but don't overdo.  (See how I started the last sentence, haha.)
An excellent way to begin a sentence is to tell where or when the action happened.  I used the word after to start my last sentence in the story. After he grabbed the ladder. . . . This describes when and moves the word he to the second word.  I could change the first sentence and still let the reader know who the character is by stating, Later Ansgar returned with the ladder. . . . This tells when.
Or, I could begin with the ladder, and write, Against the tree, Ansgar leaned the ladder. This tells where and identifies the character in the first sentence.
Adverbs ending in ly can also be used at the beginning of the sentence, but if you want to publish the story hardly ever, use an adverb.  Agents and publishers don't like them.  Maybe adverbs are used too often. Publishers want strong verbs that don't need help with an adverb.  If you don't want to publish and are writing for yourself and friends, go for it and use adverbs.
Summary of beginning sentences:  use when, where, ing, conjunction, combine sentences and Show Don't Tell.
I hope this information helps.  Send me any suggestions you have.  Am I going too fast or too slow?  Let me know.
The next blog will be on making your own metaphors and some other little tips that help me.  Those who are writing for pleasure may want to stop after next week.  You can lift off into the atmosphere of creative writing.
Those interested in publishing may want the following week's blog.  Tips that help me to get ready to publish will be posted.
Whatever your intent for your writing, do it for your enjoyment.  Have Fun.
One more blog, and we will have climbed the elephant and lifted off into the creative writing atmosphere. 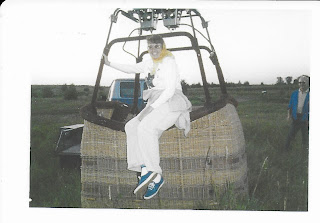